The Nexus Between Coercion and Casualty 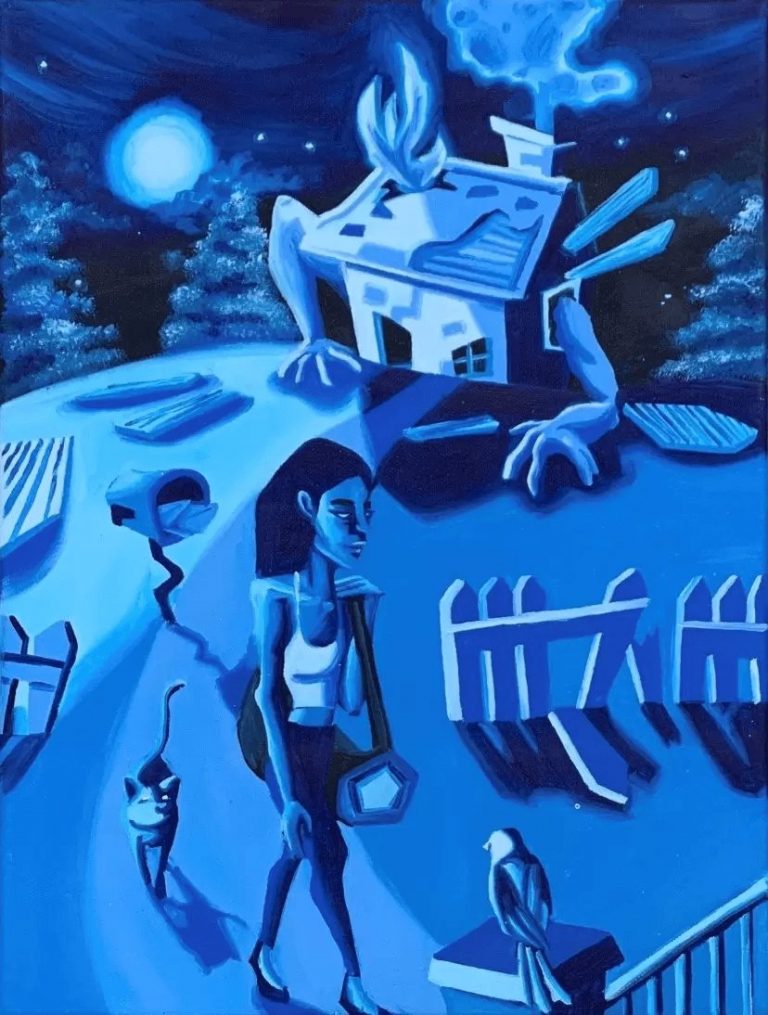 Art is one of the most powerful tools for making sense of the world that surrounds us and for coping with life’s most challenging experiences. The transformational potential of art, and particularly of painting, is evidenced in Nicole Welsh´s exhibition at the Art Syndicate Gallery, in Sydney, where this young emerging artist presents a series of blue-coloured figurative oil paintings populated by distorted and expressive characters and symbolic motifs that together tell fragments of a story of coercion, violence, entrapment, abuse and, ultimately, of freedom and rebirth.

The twelve gestural and monochromatic small and middle-sized paintings that form part of the exhibition titled The nexus between coercion and casualty are deeply autobiographical given they are inspired by the artist’s personal experiences having gone through an abusive relationship and domestic violence. As a means to access these dark and painful memories, the artist, who currently studies at The National Art School, relied on the Surrealist technique of automatism which allowed them to access, visualize and influence their unconscious memories. In their own words, through this process, they “turned the characters into distorted fragments and forms’ ‘[1] that reflected the myriad of emotions they felt when revisiting this period in their life.

Next to the Surrealist techniques, when creating this series, the artist took Pablo Picasso’s emblematic blue period[2] as a visual referent given they were drawn to how this artist was able to communicate extremely powerful emotions only through one color set. At the same time, Nicole was attracted to how the different tones and shades of blue, which are present throughout the series, can convey both sadness and serenity. In the artist´s words: “This dual meaning allows the reality of the series to be seen as what it is, saddening, but knowingly it becomes peaceful and hopeful, as the victim takes their exit out of this experience in the end.”[3] In this way, the artist portrayed their life story through a blue lens that grants this series a poetical yet powerful aura.

Side by side to the color palette, within the visual narrative of this series, the gestures, scales, postures, and distorted body proportions of the woman and man who are the main characters of this story are crucial to conveying the different stages of an abusive relationship and the dynamics of seduction, coercion, control, fear, violence, and finally redemption that are told in each of the canvases. The latter is especially perceived in the painting Awake, where the woman is curled in a fetal-like position as if trying to shield and soothe herself from her pain and fear; and in the work Bathroom Reset, where she is lying on the floor grabbing it with claw-like hands which reveal both her fear and courage for a new beginning. At the same time, in Blue Lagoon, the man´s hunched back and exaggerated spine uncovers his true aggressive self to the mirror in front of him.

Adding on, the paintings of this exhibition are populated by symbolic motifs which relate to its Surrealist nature and add diverse layers of meaning to the depicted scenes. For example, in many of the canvases, the interior spaces of a house, such as the living room, bathroom or bedroom, contribute to creating the feeling of entrapment, while the two scenes that portray the exterior of the house refer to both the beginning and ending of the relationship alluding to the difficult yet possible escape. According to the artist, “…though we learn from the series that this ‘house’ is escapable, it takes much strength and confidence to do so…, it is new and it is scary, but we do it anyway to form new pathways and a new way of living for the better.”[4]

Alongside the house, within this series, other symbolically charged animals, body parts, and objects have a narrative purpose. Such is the case of the eye depicted in the work The All-Seeing Eye, which refers to the feeling of being controlled and watched at all times; of the bird included in the painting Blue Lagoon that connects us with the vigilant and predatory nature of the man; or of the wood logs that block the door of a room in the painting Hermit, acting as a metaphor of being emotionally and physically trapped. For the artist, one of the most significant symbols is the jackal-like figure located next to the girl in the work Jigsaw, which is the last painting of this series. Nicole views the jackal as a protective animal that guides the woman to freedom and will help her to glue back together the pieces of her life which are scattered on the floor in the form of a jigsaw puzzle. With this imagery the artist seems to point out that finding inner freedom and rebuilding self-esteem is possible but it will take some time.

Importantly, next to working as a cathartic and therapeutic process for the artist, this series intends to raise awareness towards domestic violence and coercion by depicting the main symptoms of an abusive relationship which is not always easily identified by the victim or by those that surround her. As the artist shared “…due to the manipulative behavior of the relationship it is extremely difficult (for victims) to know or understand if they are in a domestically violent situation, so the series works in a way that the symptoms are clear, and hopefully if a victim were to recognize this, would seek help, assistance and the confidence to leave.” It is certainly refreshing to see a young artist that courageously shares their own experience with abuse through their pictorial language and, while doing so, spreads a socially relevant message tinted with hope. There is always light at the end of the tunnel…

The nexus between coercion and casualty will be on view at The Art Syndicate, a new wave art collective based in a renovated warehouse in St Peters, Sydney, which specialises in street art and media. Saxon Strauss, the gallery owner, decided to feature this exhibition given the topics depicted in it resonate to his own life experiences and also because he considers it crucial to raise awareness towards domestic violence and abuse.

Australian based artist, Nicole Welsh (b. 1998), is an emerging painter and student at the National Art School who depicts important and emotional concepts through a symbolic language and the exploration of the human figure. Frequently experimenting with a wide array of techniques, materials and styles, the artist tackles each concept as a means to bring awareness towards confrontational ideas, start conversations, and trigger an emotional response. Their work is inspired by personal experiences, storytelling and emotional output.

Through her projects Nicole explores issues in our society, such as domestic violence with their recent series The Nexus Between Coercion and Casualty, and were selected as a finalist in the Blacktown City Art Prize for their work Still Human, which addresses discrimination towards the Transgender community.

The artist’s creative process begins with a feeling or an experience from self or others using it as the foundation for their work and then uses different techniques, such as automatism, to visualize these themes. Nicole takes a unique approach to each painting in order to convey the intended conceptual message and detonate an immediate reaction in the viewer.

[2] Between 1901 and 1904 Picasso painted essentially monochromatic paintings in shades of blue and blue-green, only occasionally warmed by other colors.