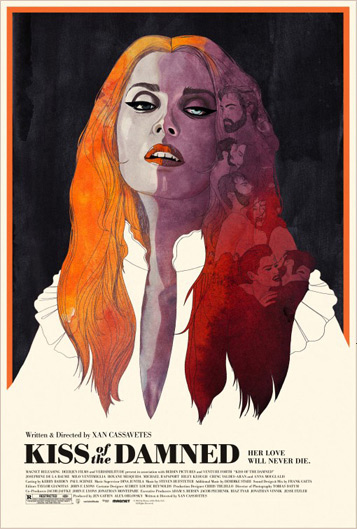 During the last 15 years, Los Angeles-based artist Akiko Stehrenberger has carved a name for herself within the design industry and, to this date, is one of the most influential and productive movie poster designers. Over the years, Akiko has worked with emblematic film directors such as Jonathan Glazer, Harmony Korine, the Coen brothers, or David Lynch, and has been honored 15 times with the Clio award. How did Akiko´s name turn into a synonym of an original, vibrant, and artful movie poster?

First of all, when talking about Akiko Stehrenberger´s work one should keep in mind that, aside from being an extremely talented artist and designer, she has an illustration background and has previous experience as an Art Director. This means she cherishes illustration as an artform and she is familiarized with all the stages of the design process from concept to the final product, something not commonly seen in other graphic artists. Akiko´s involvement with the movie poster industry began 16 years ago when she was hired as a Junior Designer of movie posters at an advertisement agency in New York City. After a few years in the business and many sleepless nights, Akiko decided to become a freelance poster designer.

Fast-tracking in time, nowadays, Akiko is a seasoned design expert who often uses a mix of traditional and digital painting techniques, mainly acrylics, graphite, and Photoshop, to obtain the desired final effects and textures. Akiko´s creativity seems endless, according to her, she has produced more than 9,000 pieces over her career but, as is frequently seen in the design industry, very few had made it to the end. For each project, she presents at least five to eight rough ideas and then works with the one the client, whether it be a movie poster shop or a big studio company, prefers.

Regarding her style, Akiko´s work is extremely diverse and is inspired by the genre and theme of each film. Some of her posters wink to Pop Art, while others connect to Surrealism or bring to top of mind the work of artists like Edward Hopper, Barkley Hendricks, or David Hockney, or of poster designers such as Bob Peak. At the same time, Akiko looks for inspiration in music, photography, or/and frequently googles keywords that pop up in her head. The great diversity of her work was recently captured in the book Akikomatic: The Work of Akiko Stehrenberger which describes her working process and features one hundred of her posters.

While Akiko has had an extremely successful career,  it was the poster she created for the movie Funny Games in 2007, displaying a cropped face of Nahomi Watts crying, that launched her to a whole new level. After this poster, Akiko´s work gained international notoriety and she started to get calls from the household names of the movie industry. Without a doubt, Akiko has created some of the most iconic posters of the last few years. Among her many creations are the posters for Under the Skin (2013), Colossal (2016), The Last Black Man in San Francisco (2019), Portrait of a Lady (2019), or The Boy Who Harnessed the Wind (2019).

As years went by, Akiko also began to get a big following in social media and her name was known by movie and art lovers. As she once said in an interview, “now with social media, movie poster designers and illustrators are starting to make a name for themselves that they couldn’t before.” While Akiko does display her posters on social media, she also has a more experimental and creative project nested under @doyrivative, and is also pursuing her artistic practice independently of her design gigs.

All in all, Akiko has contributed to infusing artfulness and liveliness to movie posters bringing back the appeal of illustration to an industry, which, during the 1990s and early 2000s, mainly included celebrity headshots. The vibrant designs that Akiko comes up with daily have also garnered the attention of collectors who are eager to collect her one-of-a-kind designs. When dealing with Akiko´s posters, more often than not, they get more attention than the film they are promoting.

Germaine´s art fraud scheme: How an art dealer got away with selling fakes for more than 20 years

What to know about the NFT art boom