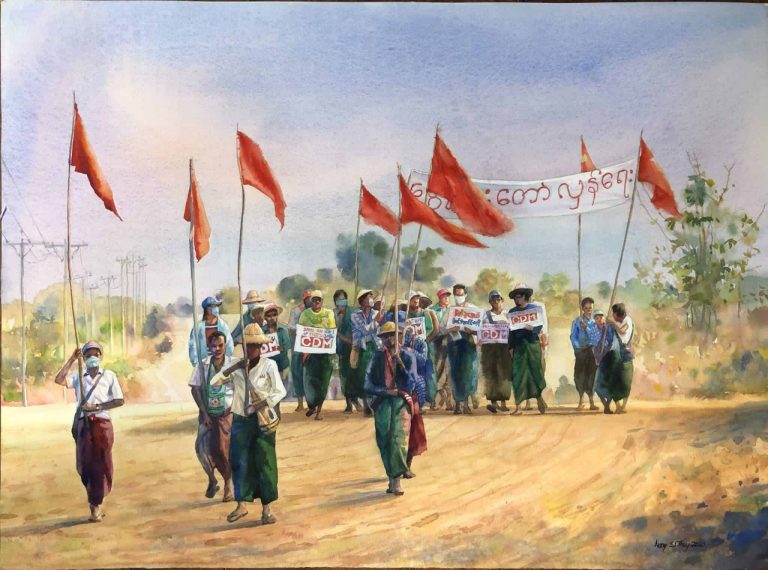 Art as a form of protest is not at all new. It is seen for example in the work by emblematic 20th-century artists like Pablo Picasso in Spain, David Alfaro Siqueiros in Mexico, Willie Bester in South Africa or Keith Haring in the US. However during the digital age in which we live in, protest art has gained more visibility and has turned into a collaborative affair bringing together people on a local and global scale. For instance, as we speak, Burmese contemporary artists are making their voices heard in the whole world to express their opposition towards the military junta. Let’s look at how the artists from Myanmar are inspiring change.

It all began on February 1st when a coup led by Burmese army general Min Aung Hlaing returned Myanmar once more to military rule refusing to accept the victory of Aung San Suu Kyi, leader of the National League for Democracy. From day one different types of creative minds have taken a stance against these events risking harsh punishment from the military known for menacing and imprisoning poets, actors, painters, and rappers alike. It is important to remember that, while these new manifestations have gotten a lot of international media attention, in Myanmar protest art has a long-lasting tradition that speaks to the relentless oppression this country has suffered for many years.

Turning back to the latest developments during the last few months, Myanmar artists have made the streets their center stage creating all sorts of imagery for civil rallies and spray-painting or projecting images on walls across the city. At the same time, at least when they have access to the web, Gen Z artists are actively using social media to vert their subversive works and make their voices heard around the globe usually making alliances with other protests movements, like the ones from Hong Kong, Thailand and Taiwan, now joined by the hashtag #MilkTeaAlliance. Further evidencing the crucial political role that social media has nowadays, artist Nobel Aung and his brother launched the private Facebook group, Art for Freedom (Myanmar), and then a website to bring together artists and protesters and to provide an outlet where artworks can be downloaded for free as long as they are used to protest the coup.

The state of affairs has also seen the emergence of different symbols with either a local or transnational connotation, something that relates to the ever-growing cultural globalization. For example, the three-fingered salute intended to defy authority coming from “Hunger Games” and first used in Thailand´s and Hong Kong’s protests have become a staple of Myanmar’s Civil Disobedience Movement. This gesture has made its way to t-shirts, stickers, signs, photographs, and collaborative artworks. For example, The Association of Myanmar Contemporary Art staged a collective photo project of people making this sign, and artist Khin Zaw Latt organized a group painting with contributions from 120 artists, each of whom added their rendering of the salute.

Aside from the widely popular hand gesture, other widely used symbols draw from Myanmar´s context and traditions. For instance, some artists have used the color red as a way to refer to Aung San Suu Kyi’s party, while others have depicted Burmese people banging pots and pans, something traditionally believed to drive out the devil. Adding on, other artists such as case Soe Yu Nwe, have created different artworks depicting peacocks, that in Myanmar symbolize royal lineage and also represent Aung San Suu Kyi´s party.

As with any kind of social movement, some names have turned into the public faces of the protests. One of them is legendary artist Aye Ko, who in 1990 staged one of Myanmar´s first contemporary art shows. His endeavor, however, was perceived as political, which led him to a 3 years’ incarceration. Regardless of having experienced censorship and oppression in his own skin, Ko kept on pursuing his interests in art and politics focusing his practice mainly on performance art and opening the non-profit New Zero Art Space in the city of Yangon. Ko, who already had an international reputation as a political artist, has been one of the most outspoken voices of the Civil Disobedience Movement and is perceived as a leader for the younger generations of artists.

Up to this point, at least 739 people, including children and young people have been killed by junta-backed security forces since the coup, and at least 4,300 have been detained for manifesting any sort of opposition against the military regime with the situation escalating day by day. Despite the heavy price, the Civil Disobedience Movement is still going strong and is now known on an international scale. Hopefully, the future will bring brighter days for this country urgently needing peace.

Jules Chéret: how the poster turned into an art form