How is the artistic community rallying against Anti-Asian hate? 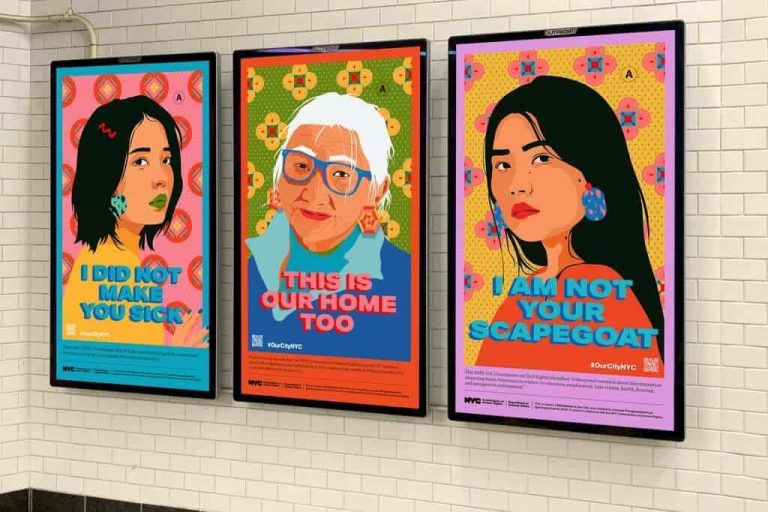 Anti-Asian racism is not at all new. However, the emergence of Covid-19 which was dubbed a “Chinese virus,” exponentially increased the number of violent acts and verbal assaults against Asian communities within the US, Australia, and elsewhere. Like many other instances across the globe, the art world has taken a stance against anti-Asian hate. This article explores how some artists, curators, and organizations within the US and Australia are creatively reacting to this pressing issue.

Let’s start by looking at the US where the recent violent crimes against Asian descent women and elderly men have sparked wide social unrest. Within the US, anti-Asian racism has been around since the 1800s when Asian descent people were perceived as “the yellow peril.” Even if during the 1960s different movements started to fight against discrimination, anti-Asian sentiments continued to exist. With the rise of the pandemic Asians were wrongfully blamed and anti-Asian hate crimes rapidly escalated. Resulting from this, a few days ago, President Biden signed a bill to address violence against Asian-Americans. While there is still a long road to cover, this bill is a first baby step towards change.

But, how is the artistic community reacting to these dreadful events? Responses come in all shapes and forms ranging from viral artworks used in rallies, op-ed letters, lectures and exhibitions to fundraisers and collaborative projects. For example, Amanda Phingbodhipakkiya, a New York-based neuroscientist turned artist, created a colorful portrait of a young Asian female for the cover of April’s issue of Time magazine that honored the six Asian women killed in Atlanta. This is hardly the first time the artist has tackled Anti-Asian hate since she also created, in partnership with the NYC Human Rights Commission, 45 portraits denouncing anti-Asian violence that were placed across New York City. Some of these portraits were used as protest signs during a March 19 rally in New York.  The latter yet again evidences the important role of art as protest and exemplifies how artworks rapidly turn into symbols of social movements.

While Phingbodhipakkiya´s art acquired international visibility, many other projects, events and organizations have addressed anti-Asian sentiments. For example, Kenneth Tam’s exhibition Silent Spikes, at Queens Museum, explores historical registers of Asian hate and the stereotypes attached to the masculinity of this widely diverse group of cultures. Likewise, other projects such as the series of lectures Art History from Home: Asian American Perspectives‘ (30 June 2020), led by curator Xin Wang at the Whitney Museum of American Art, followed the same line of inquiry. Last but not least, some of the most reputed art publications, like Art Forum, were publicly called out by artists to end their ‘silence’ on the Stop Asian Hate movement and provide a direct response to it. As we speak many other projects continue to be developed.

Now, anti-Asian hate spreads to other parts of the world, such as Australia, where for centuries the Asian presence has been a strong yet troubled one. Even if many Australians are proud of their multicultural country, racism is still lived in the streets. Similar to the US, insults, violence, and vandalism against Asians have increased dramatically since the advent of COVID-19. Different artists and projects have tackled these issues. Such is the case of #I am not a virus Australia, a collaborative initiative that registers violent acts against Asian descent people within Australia and that, up to this point, has commissioned  68 Asian artists in Australia to create new works of diverse mediums that speak to racism and abuse. This interesting project fosters the creation of a community of artists from Asian descent and gives them a platform to exhibit their art.

Many more artists and projects are invested in this once silent fight for equality that has now gained more followers and international visibility. All in all, anti-Asian hate is a pressing issue that needs to be tackled both on a local and global scale considering the differences and commonalities between a group of people from more than 20 countries and 100 languages. Stereotypes feed us humans and, while we may not be able to escape from them, acknowledging them is the first step towards change.

The Art Syndicate Staff Writer: Constanza Ontiveros Valdés   Every once in a while a…
read more