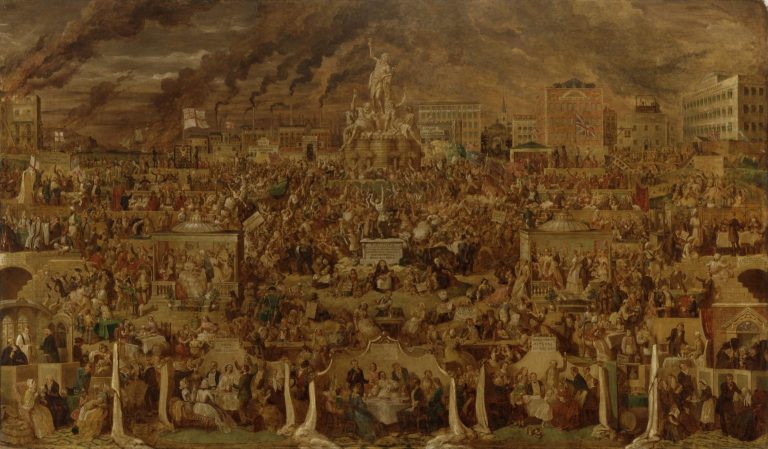 Since the dawn of ancient cultures artists have been portraying alcohol consumption as a means to represent religious beliefs and rituals, mythological scenes, or moral commentaries. Especially since the 17th century, artists have also depicted daily life scenes involving drinking in a moderate or, more frequently, excessive fashion. Let’s look at some examples of how artists have made drinking a recurring topic throughout art history.

The Greeks and Romans: the long-lasting legacy of Bacchus and Dionysus

While drinking scenes were represented beforehand, it was the Greeks who created the most important references for the imagery of alcohol consumption in the West. As explained by The Getty Museum, Greek artists frequently represented both Dionysus, the god of wine and ecstasy, and the “symposion,” a reunion for  men of status to meet and drink wine, in Attic black-figure vases. These practices were transferred through trade and cultural contact to the Etruscans and Romans, and particularly the latter incorporated the Greek traditions and worshipped Dionysus, an adaptation of the Greek Bacchus, and represented him in sculptures and objects. Given its importance for the Western world, the Greco-Roman tradition of drinking has called the attention of scholars and has been the subject of art exhibitions, such as Drinking with the Gods, on view at La Cité du Vin, in Bordeaux, France, which dives into the meaning that drinking had for these cultures.

Now, as with all things connected to the Greco-Roman world, the representations of Bacchus and Dionysus were continuously revisited by some of the most important artists of the 16th and 17th centuries who created their unique interpretations of the nature of these mythical figures. Among them, we can name Caravaggio (1571-1610), who in 1596 painted a portrait of Bacchus picturing him as a delicate adolescent holding a glass of wine, or Diego Velázquez (1599-1660), who in 1628-29 represented a group of drunk men surrounding Bacchus. Likewise, other artists, like Nicolas Poussin (1594–1665), represented a bacchanalian or social gathering associated with wine consumption and excess. In the following centuries, many other artists continued to be inspired by the gods of wine and created countless versions of them.

Next to representing alcohol consumption as part of the Greco-Roman mythological tradition, other artists chose to depict daily life scenes of drunkenness as a means to caricaturize or criticize these practices or make a moral commentary about them. One of the most popular artists that captured this sort of scene was Jan Steen, a 17th-century Dutch artist who portrayed several interiors of taverns where the characters were drunk or dancing and where moral commentaries or proverbs were embedded in the compositions warning for such behavior .

Interestingly, other daily life scenes of alcohol consumption were captured in the exhibition Art and Alcohol, organized in 2016 at Tate Britain, in London, which was one of the first to tackle this subject. Among the works included were William Hogarth´s print Gin Lane, which, inspired by the popularity of cheap Dutch alcohol during the 18th century, is a realistic and striking representation of the effects that alcohol excess has in an almost macabre fashion. Also, the exhibition included  the rowdy “lowlife” scenes of 19th Century painter David Wilkie, as well as The Worship of Bacchus (1860-62), a large-scale painting by George Cruikshank  (1792–1878) that represents a mob of drunk people. Some of the artists in this exhibition captured daily life drinking habits as a means to provide a moral message. Such is the case of a painting by Robert Braithwaite Martineau (1826–1869) titled The Last Day in the Old Home (1862) that shares the story of a family home lost to irresponsible behavior driven by alcohol and gambling.

Next to other drinks, such as wine, beer, or spirits, absinthe has a widely documented role in late 19th-century and early 20th-century visual art and was the subject of many paintings of the day. As described by a Daily Art Magazine article, the latter is explained by the emergence of absinthe, known in France as “La Fée Verte” or the Green Fairy, as one of the most popular drinks among intellectuals and artists both for its hallucinogenic effects and its price. Among the most famous scenes of absinthe drinking of the 19th century are the ones captured by French artists like Toulouse-Lautrec, Edouard Manet, Vincent Van Gogh, Edgar Degas,  and also in the early 20th century Picasso represented absinthe drinking scenes.

Apart from what I mentioned here there are many other representations of alcohol in art, a good number of which can be seen in The Virtual Wine Museum. The important thing to keep in mind is that, even if for centuries alcohol has been frequently represented by artists, each artist coloured it with its distinctive set of intentions drawing from or making a commentary of the societal rules, prejudices and beliefs of a given community. Alcohol has always been here and will continue to be, but the unique gaze of each artist is what will continue to transform it in endlessly creative ways.

How is the artistic community rallying against Anti-Asian hate?

What is Contemporary Aboriginal Art?